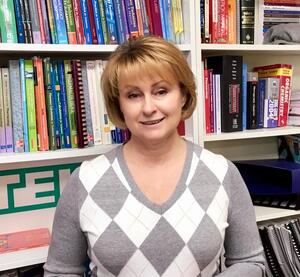 Irina Parsova is one of 6 ACA instructors who were nominated for the Career Colleges Ontario Excellence in Teaching award. Irina is an Instructor of Pharmacy Technician at the Mississauga campus.  Irina’s journey began in the Ukraine and growing up Kazakhstan. As a young child Irina’s parents always knew that she would pursue higher education.  Constantly immersed in books and conducting science experiments was where Irina could be found while her siblings were playing with toys.  Her high school years only solidified this belief as she was awarded the Gold Medal honour for the highest marks. After attending Kazan State Chemical University, where she completed her Master’s Degree in Bio Chemical Technology and Engineering, Irina began teaching High School.

While teaching hadn’t been what Irina had aspired to do, we know that universe has a way of guiding us to where we belong and it was clear that Irina had a natural talent for connecting the information to students.

In 1992 the Soviet Union collapse began and the national tension was unbearable - threats became a part of every life.  Irina made the challenging decision that many new immigrants have faced - a brand new country and a new life with no family support but the chance at making a better life for her 2 young children and herself.

When we asked Irina how she relates to her students she had this to say “I have been in their situation, I know and empathize with the burden of integrating into a new country, the loneliness of not knowing anyone, no job and no comforts surrounding you”.

Professional Collaboration is at the core of Irina’s teachings.  She actively involves community members as guest lecturers such as members of the Ontario College of Pharmacists (OCP) and The Pharmacy Examining Board of Canada (PEBC).  Over the years, Irina has ensured that her program reflects the current healthcare issues, such as the opioid crisis or Medical Assistance in Dying. These topics embrace the role of the Pharmacy Technician.

Irina’s connection to the profession extends well beyond the classroom.  As an active and recognized educator, Irina has participated in inspection of schools across Canada seeking pharmacy technician program accreditation.

Irina has many success stories over the years that have left a lasting mark on her own journey. One is a recent graduate who was hired directly from his hospital placement. Because his sterile preparation technique and knowledge were so outstanding, he was promoted to regional hospital trainer. After working in that role for a year, he was offered a teaching position in Qatar where he flourished and has just assisted the Qatar based English school achieve accreditation status for the program.  This and many stories like this are why Irina teaches.  Irina explains “It is the true feeling of selflessness to see others succeed and knowing that I played even a small role in that success”.

When we asked Irina’s colleagues why they nominated her for this award they had this to say:

“She is one of the most committed and hardworking people I know. Her passion and incredible work ethic is hard to ignore, and very inspiring. She’s so precise, organized and on the ball. I’ve always felt so accepted and appreciated by her. This makes me want to work harder and strive for more for the program.”

“Her community contribution is all the grads she has taught and prepared for their future successes. All while taking care of her family. She’s a leader in all aspects of her life and I adore her for this.”

“Irina is our own “Bill Nye the Science Guy”, her knowledge and technical ability always leaves me amazed.”

When we spoke to some of Irina’s students here is what they had to say:

“I have experienced a new-found appreciation for math. Irina helped me to better understand these concepts.”

“As I get closer to the end of my program, I feel an immense change in my skills and confidence, thanks to Irina for guiding me through some very tough courses.”

Where does Irina see herself in the future? Well, exactly where the universe channeled her more than 30 years ago, at the front of the classroom, guiding the Pharmacy Technician students of tomorrow!