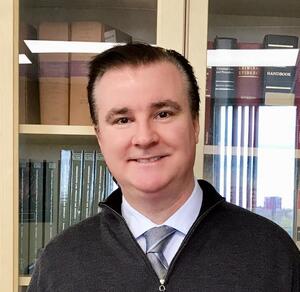 Ian Bell is one of the six ACA instructors nominated for a CCO Excellence in Teaching Award.  Ian, a licensed Paralegal, is an Instructor and Program Coordinator of the Paralegal Program in Mississauga. If teaching is an inherent trait, then Ian came by it honestly.  As the son of a tenured teacher, Ian aspired to follow his father’s academic path.  Ian grew up in Barrie, Ontario, when it was still a small town and mainly cottage country.  While teaching remained a possible path, Ian began the journey towards becoming a lawyer. However, the opportunity to teach at Beverly Heights Junior High School during university, sparked a flame that would change his career path.

Before he fully explored the legal profession, Ian represented a family member at the Landlord & Tenant board; he prevailed and was then known as the go-to guy for all the family's legal needs. In fact, it became such a part of his life that he sought out a school that would allow him to become licensed by the law society.  And that is how Ian found Algonquin Careers Academy.

While a student at Algonquin, Ian saw that he could finally fulfill his dream of working in law; not as a lawyer, but as a paralegal.  But Algonquin also reminded Ian about something else - that he loved the classroom experience.  After starting his own practice and with a few years of legal experience, Ian joined the Algonquin Legal Team. Ian currently operates a successful practice while teaching both in the morning and evening paralegal classes.  In the 5 years teaching with Algonquin, Ian has never taken a sick day or been late for his class; this is because he is so committed to his students that to let them down would be letting himself down.  This sense of commitment to his craftsmanship spreads to his classroom.

Ian is known as the technical guru at the college and is always seeking different ways to enhance and bring technology into the classroom.  A great example of this creativity is when Ian had identified that many students were scoring below average specifically with the multiple choice questions. Ian implemented an interactive review where students use their smart phones to participate.  Not only did the students see increased test scores and a better understanding through this review, they also enjoyed the injection of new technology in their learning.  This is just one example of the foresight that makes Ian a wonderful instructor. In 2017, Ian was promoted to the Paralegal Program Coordinator.  It is in this role that Ian ensures that the academic integrity and professional standards are met.

With 5 years of teaching now behind Ian, he often reflects on his teaching achievements and recalls that in the last year, three of Ian’s students partnered together and opened a paralegal practice focusing on different areas of law.  Ian’s mentorship helped inspire these students. Many of Ian’s students have begun legal careers throughout Ontario appearing in front of:

While Ian remains fully engaged in the legal profession, his contributions to the community have included:

When we asked Ian’s colleagues why they nominated him for this award they had this to say:

“Ian displays a tremendous amount of dedication and commitment to his students, often coming in hours before or staying hours after class to ensure that students get that individual assistance that is needed to ensure their continued success and development in the paralegal program.”

“Ian has so much knowledge to share; he gives without hesitation and shares without bias.”

What is next for Ian? I find great comfort in the balance that I have found with an active practice and a fulfilling teaching career.  When I see former students who are now equal colleagues, with successful careers, I couldn't be more pleased.  So, for now, I am where I belong, with my Algonquin Family!