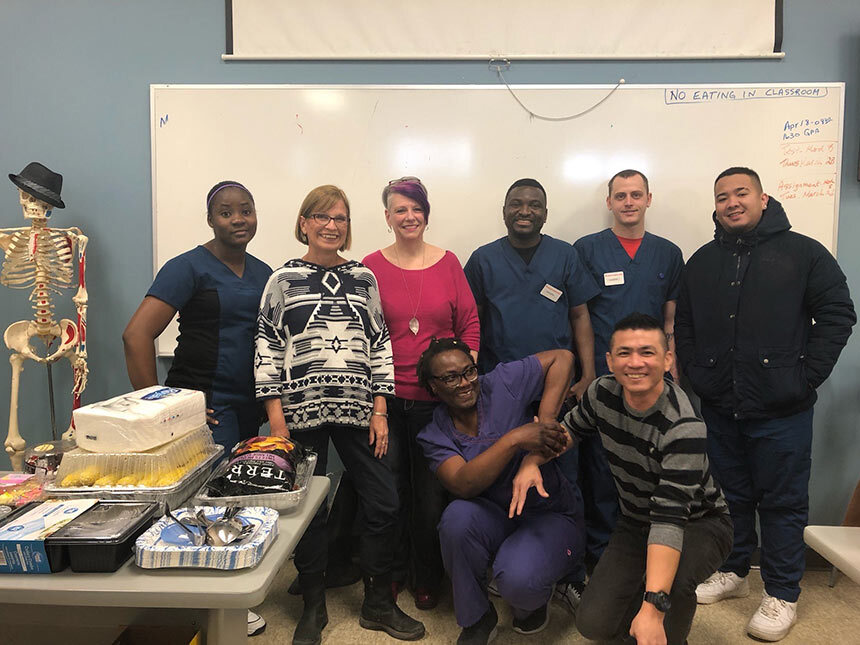 Here, we’re in conversation with Michele Dewitt, longtime Personal Support Worker program instructor at ACA, about the student successes she’s witnessed first-hand over the years and what advice she has for prospective PSWs. Michele has been with the program for many years, and has over 38 years of experience working in geriatric care. Below, get inspired with these three stories of students who have overcome barriers to excel in their PSW training.

1. A Student Who Overcame Adversity During Personal Support Worker Training

While guiding students through the personal support worker program, Michele found one story particularly motivating. “I had a student who shared with me that she had a very tough upbringing. She lived in a marginalized area, and she had a lot of things happen to her on and off throughout her life. She did quite poorly in high school (I guess she had quite the attitude), but she went into this program with both feet. She was a joy to teach, she had a great sense of humour and seemed to be really engaged.

When she began the clinical aspect, it seemed that all her skills that had been hiding inside from her youth sort of came out. She’s only in her late 20s, and she has a young son, and I think she’s begun to realize that she needs to make a better life for him, so she dug her heels in and took off running. She ended up getting a part-time job while she was in clinical, performing the COVID screening and swabbing. She’s been hired for two jobs already, and they love having her.

“When I gave her her evaluation, we chatted about her expression of gratitude and mine to her. I’ve learned so much from her—I always do from students. She was in the right place at the right time, and her life needed to change. Our classroom environment was just what she needed and it clicked for her. During the PSW program, she’s gone from being kind of lost to being a real leader.” 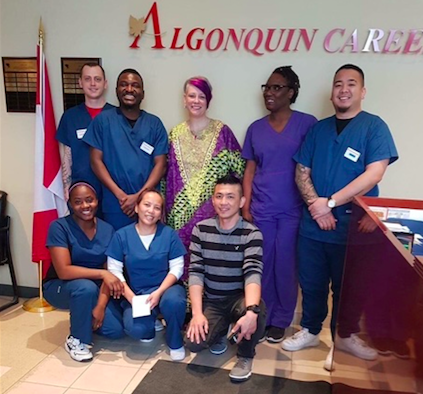 Above, Michele is pictured with students after receiving a Nigerian dress from some of them.

Another story that inspired Michele is that of a pair of students who were a couple, beginning their personal support worker training as new immigrants to the country with two children. “They both decided to go back to school at the same time, which is not easy. They were both in studies, both trying to be parents, and what’s more, it was their first winter here as immigrants. Despite this, they came to class every single day, and they ended up being the couple that tied for the highest standing in the class.”

“I ended up nominating them for the Presidential Award that we give out, and it was received by both of them upon graduation. That was one of the proudest moments with my students that I could have had,” she says. Although they were new immigrants with children adjusting to a new environment, they never missed a day of school and consistently participated. “I learned a lot about their culture from them, and it was just extremely rewarding to see those students excel. I still hear from them. Recently, one of them was looking for another job and I was able to provide a reference. It’s so nice when you can provide that really strong reference for someone and say that ‘you’re going to love this PSW, they’re what the profession is all about.’ That was very rewarding,” says Michele. 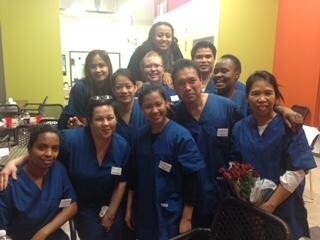 Pictured above are a few of Michele’s students in personal support worker training.

3. Enrolling in a Personal Support Worker Program as an ESL Student

Lastly, Michele describes the experience of her students who are learning English as a Second Language (ESL). ESL students often begin the program with a significant disadvantage, as they’re not able to communicate or retain information with the same ease as native English speakers. According to Michele, “One of the things that I really encourage is to practice your English in class. I have a lot of empathy for ESL students and I encourage them and their classmates to start talking to one another.

Often, you can see the improvement in English by the second or third week. Even if their assignments or test scores are just above passing, what’s important is that they keep growing and trying. That 70 is like a 90 for someone who’s English as a Second Language. They really have to apply themselves, and when I read through their assignments and see how much they’re changing over time and how much they’re grasping, it’s important.

“I think encouraging them and telling them how great of a job they’re doing gives them a boost of confidence. It also gives me a boost of confidence as an instructor, just knowing that I’m able to present the concepts in a way that students will understand. I really take my hat off to ESL students. I have a few students in my classroom who have only been in the country for a couple of months, and it’s amazing to watch them.”

If you were inspired by these stories, a career as a personal support worker might be right for you! With help from instructors like Michele, you can build the skills you need to establish a sustainable and rewarding career in the field.

Ready to enroll in a personal support worker course?